In the first part of this series I stated I'd very likely start all my new Android projects in Kotlin. Don't get me wrong, I don't hate Java, but why would I make such a bold claim? The answer is null. Or more specifically, the explicit detraction of the use of null that Kotlin promotes. Kotlin has some nice features, but its handling of null variables is what hooked me.

Every developer is familiar with the dreaded NullPointerException (NPE). Most NPEs can be eliminated through discipline and good software development practices. But even the best of us every now and then forgets to do a null check and some data that we expected to be initialized wasn't, and our program comes crashing down around us (hopefully well before the application goes to production).

Kotlin by default forces you to explicitly state a variable is nullable at the time it is declared. This might seem annoying, and at first it is, but you'll quickly learn to embrace the idea (and trust me, its easier than shotgunning your code base with @NotNull and @Nullable annotations). Lets take a quick look at a sample here:

But what if you need null? Too easy:

That's cool and all, but Android Studio lets me know when I'm using a null variable. But does it though? Consider this:

Do you trust this? Android Studio won't warn you, but you shouldn't:

getData() returns null if the current time is even, "Data" if odd.

Yes, this is deliberately bad code, but how often and how closely do you look at your library's implementation? 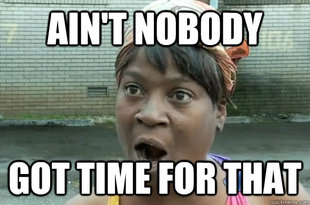 The problem here is trust and the problem with trust is time. The more I can trust a code base, the less time it takes me to develop a solution.

As pointed out, in Java we can't just infer trust on code. Eventually we'll get bit by null, so we end up filling our codebase with null checks and handling them in unique ways depending on what we're doing. I'm pretty sure everyone who has spent time writing Java has written a null check on some code where there's no physical way for the data to be null, but you did it just in case or because you couldn't be sure.

Kotlin overcomes this by embracing types as Nullable (explicitly) or Non-Null (implicitly) and requires you to handle these references appropriately in order to compile. Kotlin won't even let the previous scenario happen:

dataArray is implicitly set to Array<String?> (nullable) because of the null value in the initialization. If we change the line to val dataArray = arrayOf("something", "data"). The implicit type of dataArray becomes Array<String> (non-null), and our BlackBoxLibrary will compile.

Now that I know I can trust BlackBoxLibrary, using it becomes simple. Rather than:

Yes, we've only saved 3 lines of code, but we also reduced our example code by 40% while increasing readability. Of course this isn't completely representative of a real code base, but the reality isn't far off. Think about the time you have to spend error handling and testing to ensure code functionality. A simple ? or lack thereof can save you and your team hours.

It is unrealistic that to expect everything to always be non-null, but nullable values should be the exception, not the rule. Enter the !!, ?, and ?: operators and the… lateinit modifier.

This nullable variable shouldn't be null!!

Sometimes a variable can't be initialized, but eventually is and at the time of use, a null state is the result of something that went wrong. Say hypothetically, you call a REST API and receive a 200 response, where the documentation guarantees data in the body of the response. HTTP response bodies can obviously be empty, so this has to be a nullable type, but it shouldn't be. This might be a situation where you want that NPE to get thrown if you see a null body, so we use !! which will essentially cast our nullable type to non-null.

As doRestCall() returns, we have assurance that the value is non-null now.

What if I want to handle the null?

Even easier, use ?. This is especially useful for retrieving nested objects where anything in the chain can be null:

Now we have the ability to use and check null objects in a chain. The equivalent in Java would be:

We can even make the Kotlin code more simple with the ?: Elvis operator.

The Elvis operator as implemented in Kotlin is basically a ternary null check:

As seen, the Elvis operator has allowed us to knock off another three lines of code from the example and (at least in my opinion) even easier to read.

This is awesome! But wait… how do you declare a null variable?

Some variables can't be instantiated because their state isn't known until after an object is constructed. While we wish this wasn't true, it is inevitable. Some things have to be declared up front as null, so if you haven't figured it out by this point, here you go:

And now the question that's obviously been on your mind… “How does this work with dependency injection?”

You want dependency injection with the safety of an assured non-null object, right? The answer: lateinit

Note, if a lateinit object isn't initialized, it will throw an NPE. You're kind of overriding the null assurance by using lateinit to tell the application that the variable will be assigned at runtime. This is fine if used by design, but beware the ability to abuse it.

That's All for Now

This series isn't going to be a fireworks show where I save the best for last. I'm putting it right here in this post. There are other good and bad features to share, but this is the one that really got me hooked, and hopefully it already has you thinking about diving deeper. Be on the lookout for more to come in the near future and feel free to message me or comment on the board if you have any questions or comments.